The allegory of the cave is a famous passage in the history of philosophy. It is a short excerpt from the beginning of Plato’s book, The Republic (1). There are a number of different interpretations of the allegory, but the one that I would like to present is within the context of education, specifically knowledge translation and the content, style and manner of its delivery. I would like to conclude with relating this to how we, as health care professionals, present knowledge within a professional dialogue.

Imagine a group of prisoners who have been chained since they were children in an underground cave. Their hands, feet, and necks are chained so that they are unable to move. All they can see in front of them, for their entire lives, is the back wall of the cave.

“Some way off, behind and higher up, a fire is burning, and between the fire and the prisoners above them runs a road, in front of which a curtain wall has been built, like a screen at puppet shows between the operators and their audience, above which they show their puppets”(1)

So, there are people who are passing by the walkway, carrying objects made of stone, behind a curtain-wall, and they make sounds to go along with the objects. These objects are projected onto the back wall of the cave for the prisoners to see. The prisoners talk and discuss these projections and come up with names for them; they are interpreting the view of the world, as it is intelligible to them. It is almost as though the prisoners are watching a puppet show for their entire lives. This is what the prisoners think is real because this is all they have ever experienced; reality for them is an interpretive existence viewing the world as a type of puppet show on the wall of a cave, created by shadows of objects and figures. In a way, this is not dissimilar to our understanding of evidence-based practice, we have a version of truth interpreted through the views of others and we, as clinicians, have to make sense of it and also interpret it ourselves, for others.

Research evidence is still testimony of evidence in that we must trust the rigor, process and presentation of it. We may not have completed and interpreted the research ourselves and therefore careful scrutiny through peer review and individual critical analysis is of utmost importance. The prisoners also co-construct the world between them, sharing a dialogue surrounding the images cast in front of them. As physiotherapists, we also share dialogue surrounding professional practice, or own values and preferences as well as what we think “works” for patients from many different perspectives. Back to the story:

One of the prisoners has help and breaks free from his chains. Then he is forced to turn around and look at the fire. The light of the fire hurts his eyes and makes him immediately want to turn back around and

“retreat to the things which he could see properly, which he would think really clearer than the things being shown him.”(2)

In other words, the prisoner initially finds the light (representing the truth, an alternative truth or reality) very challenging to see and so does not want to pursue it. It would be easier to look away back into the shadows.

However, after his eyes adjust to the firelight, reluctantly and with great difficulty he is forced to progress out of the cave and into the sunlight, which is a painful process. This represents a journey of greater understanding and the challenges that come with it. We have all found the journey of gaining knowledge, interpreting it and applying it a challenge in one way or another in our personal and professional lives. The story continues:

So the prisoner progressed past the realm of the firelight, and now into the realm of sunlight. The first thing he would find easiest to look at is the shadows, and then reflections of men and objects in the water, and then finally the prisoner is able to look at the sun itself which he realises is the source of the reflections. For me, this represents the way in which knowledge can be delivered may be best understood within the context of previous experience including socially acceptable constructs. This allows connections to be made between our prior views of the world and the formation of new information or knowledge that we have perceived and interpreted. When these connections relate to prior experience or conceptualised within familiar paradigms, they become easier to digest, absorb and interpret successfully. Simply being told new information in an abstract way or delivered in a style and manner that is out of keeping of social norms may not be a successful strategy. 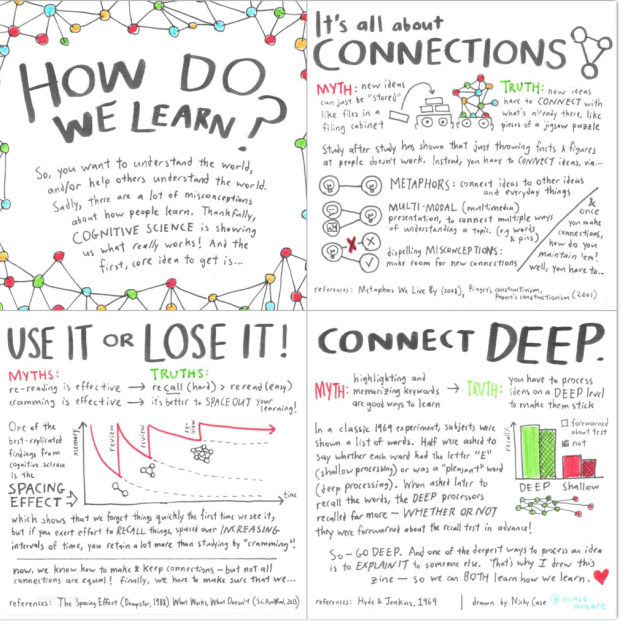 Back to the escapee: When the prisoner finally looks at the sun he sees the world and everything surrounding him and begins to feel sorry for his fellow prisoner’s who are still stuck in the cave. So, he goes back into the cave and tries to tell his fellow prisoners the truth outside. But the prisoners think that he is dangerous because the information that he tells them is so abstract and opposed to what they know. The prisoners choose not to be free because they are comfortable in their own world of ignorance, and they are hostile to people who want to give them an alternative view of the world. My interpretation is that there is a natural tendency to resist certain forms of knowledge, particularly if the subject area has been around for a while. Ignorance is bliss! The prisoner that escaped from the cave questioned all his beliefs as he experienced a change in his view of the world rather than just being told an alternative. Being a passive observer, as the prisoners who wish to stay in the cave, would generally prefer to keep things as they are. This says something to me about the experience of knowledge translation; the impact will depend on a number of variables that effect an individual’s perception.

According to Plato, education is seeing things differently. Therefore, as our conception of truth changes, so will our engagement with education. He believed that we all have the capacity to learn but not everyone has the desire to learn; desire and resistance are important in education because we have to be willing to learn alternative paradigms even though it may be hard to accept at times. Creating the desire to learn through the style and manner of motivational interviewing (3) makes even more sense here, particularly with regards to the ‘righting reflex’. The ‘righting reflex’ is the natural tendency that well-intended people have to fix what seems wrong or incorrect and to set them on to the ‘proper’ course. This often results in telling people what to do in a very directive manner that frequently ends up putting people off or stifling change rather than steering people on an alternative path.

The people who were carrying the objects across the walkway, which projected shadows on the wall, represent the authority of today. Within the physiotherapy profession, they may be our union leaders, educators, researchers, course providers, cultural influencers, social media icons as well as clinical and professional leads; they influence the opinions of people and help determine the beliefs and attitudes of people within our professional society. The person who helped the prisoner out of the cave could be seen as a teacher. Socrates compares his work as a teacher like that of a midwife. A midwife does not give birth for a person, however a midwife has seen a lot of people give birth and coached a lot of people through it, similarly, a teacher does not get an education for the student, but can guide students towards it. Similarly, professional dialogue appears best suited towards guiding people towards alternative “truths” or perspectives. The style and manner of its delivery is clearly important and it appears to have the greatest effect if it is surrounded by within and between each other’s experiences that create connections with other previous understanding. Using a direct style and manner that is out of keeping with professional dialogue is unlikely to facilitate learning or behavioural change, in fact, it is more likely to make people resist it. Much like, if the escaped prisoner returned to the other prisoners brandishing a torch lit by the flame and put it close to them to see an alternative perspective. This would likely cause the imprisoned prisoners flinch and close their eyes from the light, therefore representing stifling learning and behavioural change. An alternative method would be to introduce the light and demonstrate how it changed the shape and position of the shadows while talking them through the process allowing the prisoners to change the perspective through cognitive and perceptive dissonance, therefore representing a challenge in the experience with brand new alternatives presented. Then the attention could be drawn to the firelight and then to the outside and show alternative possibilities.

I hope this blog highlights how we might communicate with each other and helps to reflect on not only what we say, but perhaps more importantly, how we say it! More specifically, the experience of knowledge translation can be transformative if the learner has a direct personal experience. The least effective means of communication of knowledge may be about giving information in a style and manner that is outside of social norms. This is most likely to be polarising, rather than inviting people along with you. A level above this might be information giving that is lacking context or information provided in a style and manner that is hierarchical or top-down. The greatest impact may be that which directly engages with its audience in a way that relates to their previous experiences with the learners making connections themselves during a sense-making process.